Finally I got a chance to play Golden Ocala!

If you are not familiar with Golden Ocala, it is a very very exclusive golf club that is rated tops in the state. The unique thing about the club is that it features several holes that are “tribute” to some very famous holes on some very famous golf courses. They are referred to as tribute holes instead of replica holes because they can’t be exactly like their counterparts. Something about “design infringement”….   But they are pretty close and it is a whole lot of fun imaging you are playing the real thing. The course was built as a public course in 1989 with 2 tribute holes and then went private in 2002 adding the additional tribute holes.

As I mentioned, it is a private club and difficult to get on, but I was lucky enough to get selected in a random draw for the FSGA (Florida State Golfers Assoc) tournament event there the other day. After the hour and a half drive to Ocala, I arrived at the impressive gated entrance, checked in and drove through the gate on the way to the course. As I drove I passed mega-million dollar homes worthy of the Hampton’s until I reached the equally lavish clubhouse.

We're not around right now. But you can send us an email and we'll get back to you, asap. 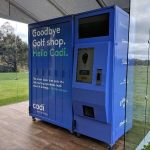